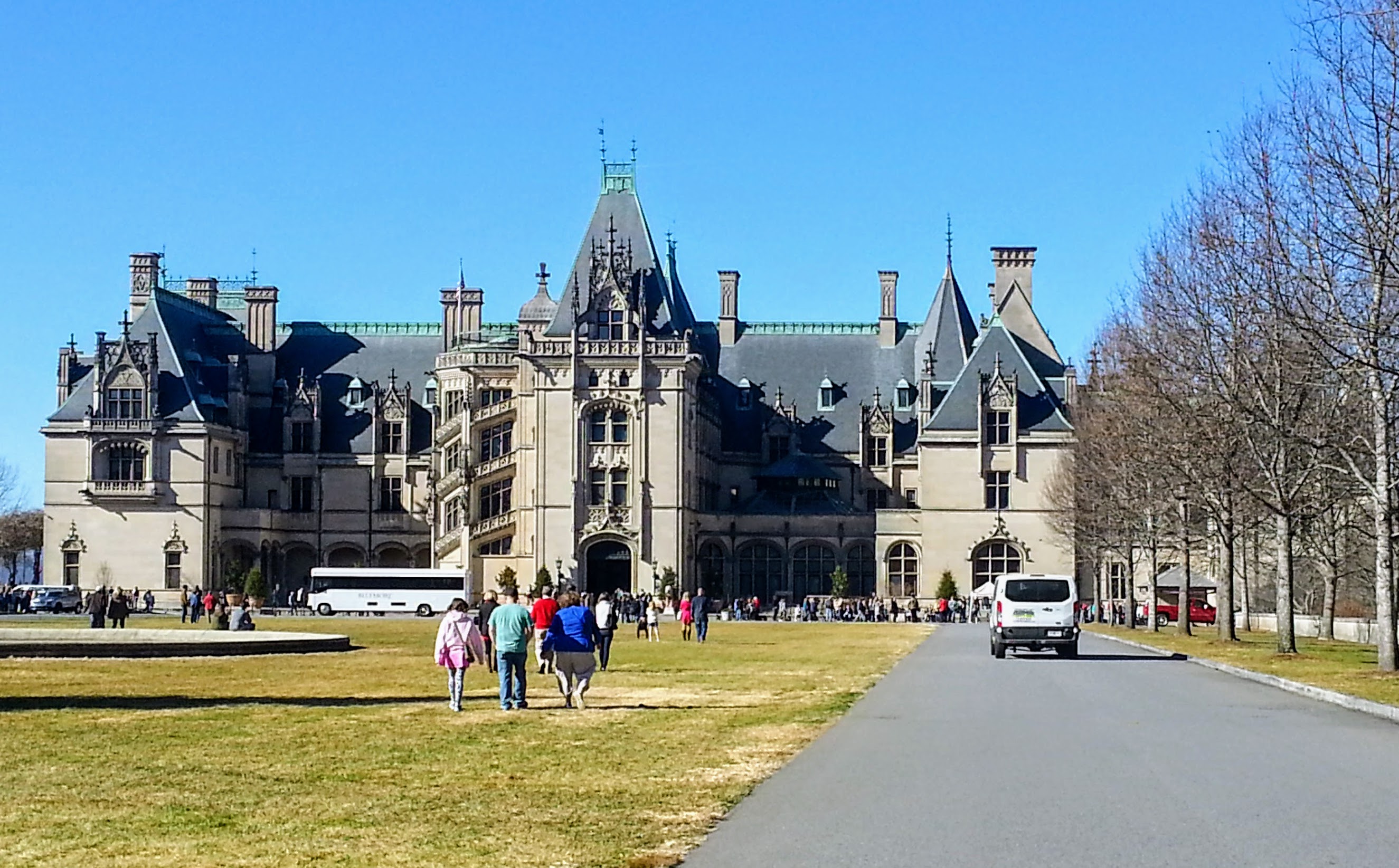 Luxury and Excess at the Biltmore

The road trip from Knoxville, Tennessee to Asheville, North Carolina snakes its way down I-40 through the verdant Smoky Mountains.  We made the trip in winter, when gossamer shrouds of mist, prompted by the crisp December air, billow up from among the dips and hollows and dissipate in the early morning sunlight. This is the time of year when Biltmore Estate dons its best holiday finery.

The 8,000-acre grounds of the estate sprawl out impressively, and at the distant end of an expansive lawn, the chateau anchors the horizon, resplendent as a crown jewel of the Gilded Age. Her spires and pinnacles held us spellbound; her 10 million pounds of polished limestone dominated both the landscape and our imaginations.

This is Biltmore House, America’s castle, the largest single-family home ever built in the United States! It was the project of George W. Vanderbilt, grandson of railroad magnate Cornelius “Commodore” Vanderbilt.

Born into poverty on Staten Island, Cornelius Vanderbilt quit school at the age of 11 to work on the waterfront. By the age of 16, he purchased his first boat and used it to ferry passengers from Staten Island to New York and back. From these simple beginnings, he grew, first a steamship company, and later a railroad and shipping enterprise. At the time of his death in 1877, his estate had ballooned to $100 million – a staggering sum at the time.

In his inequitable will, Cornelius Vanderbilt bequeathed $90 million to his son William Henry, $7.5 million to William’s four sons, and the residue of his estate to his second wife and his eight daughters.

William Henry Vanderbilt, a business mogul in his own right, nearly doubled the family fortune. Unlike his father before him, he was a generous philanthropist but still left a fortune of nearly $200 million at the time of his death. The bulk of William’s estate was split between his two oldest sons, and, although George received far less money, his inheritance still amounted to several million dollars.

George W. Vanderbilt used his inheritance to design Biltmore in collaboration with architect Richard Morris Hunt and landscape architect Frederick Law Olmsted (of Central Park fame).  The ‘House’ takes its cues from the châteaux of the Loire Valley of France, including Blois, Chenonceau, and, of course, Chambord.  As mind boggling as the other statistics attributed to Biltmore, is the $6 million dollar price tag ($1.6 billion in today’s money) on this extravagant country retreat for three: George, his wife Edith, and their daughter Cornelia.

Beginning in 1889, one thousand men toiled for six years to complete the ‘House’.  George Vanderbilt finally opened Biltmore Estate to family and friends on Christmas Eve, 1895.

The home boasts some 250 rooms, including 35 bedrooms, a glass-domed winter garden, a banquet hall, library, music room, loggia, tapestry gallery, and massive four-story spiral staircase. In the basement, the family enjoyed their own bowling alley, gymnasium, and 70,000 gallon heated and lighted swimming pool.

The medieval banquet hall, with its arched ceiling towering 70 feet overhead, hosted guests at a 40-foot table, opposite a massive fireplace – one of 65 throughout the home.  In this banquet hall, the Vanderbilts entertained a variety of luminaries, including artists, politicians, and authors.

Those with a penchant for the Downton Abbey television series will be tempted to draw comparisons to Highclere Castle, ancestral home of Lord Carnarvon, who financed the excavation of Tutankhamun’s tomb. The lifestyle at Biltmore did, in fact, resemble that portrayed in Downton Abbey.

All that changed in 1930, when Cornelia Vanderbilt Cecil opened Biltmore to the public, in an effort to draw tourists and stimulate the local economy during the Depression. Today, Biltmore welcomes 1.4 million visitors each year and provides employment for more than 2,000 people.  The Estate’s present 8,000 acres include several restaurants, extensive gardens, the nation’s most visited winery, luxury hotels, and a variety of shops.

No visit to Asheville would be complete without a pilgrimage to the Biltmore. We recommend pre-purchasing tickets, which range in price upward from $54, depending on the date of your visit and the amenities selected. Plan to arrive early and spend a good five hours or more traveling back in time and imagining yourself a Vanderbilt, as you wander the magnificent rooms and gardens.

Stop for down-home Appalachian comfort food at the Stable Café, so named because it is located in the former carriage house and horse stable. You can’t beat the ambiance at this casual dining restaurant, winner of a 2020 Open Table Diners’ Choice Award. We thoroughly enjoyed it!

If you are over 21, take advantage of the complimentary wine tasting at Biltmore’s very own world-class winery, included with your daytime admission.

And if you’ve traveled from afar, or if you just want to extend your stay, you can reserve a room at one of several of hotels right on the Estate.

One thought on “Asheville, NC: A Little Castle for Three”